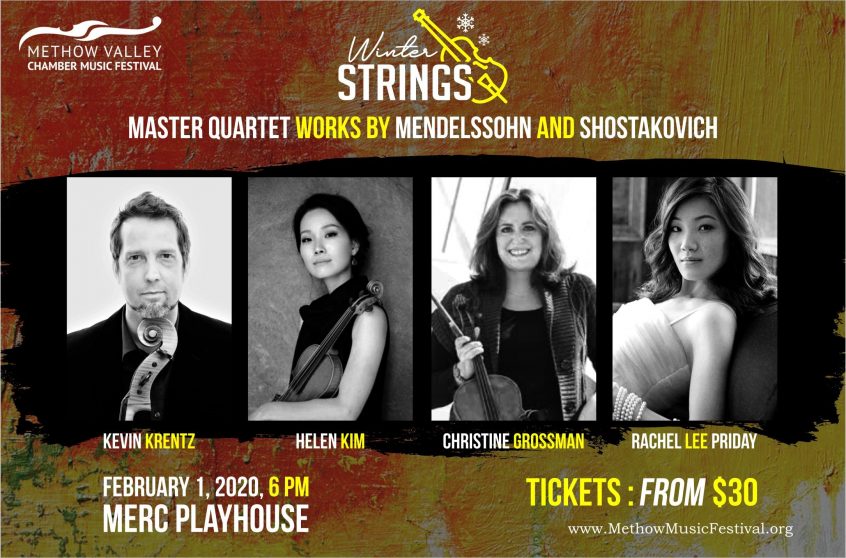 Lovers of chamber music don’t have to wait until summer to get their fix of the gorgeous blend of a string quartet.

The Methow Valley Chamber Music Festival is kicking off its 25th season with “Winter Strings,” a program of sultry string quartets to warm a long February night.

Priday is an accomplished soloist with major orchestras around the world who’s been praised for her “irresistible panache” and “dazzling dexterity.” She plays a violin made in Naples in 1760 that she dubbed “Alejandro.”

Since her orchestral debut with the Calgary Philharmonic at the age of 6, Kim has performed around the country and garnered more than a hundred national and international awards. She was recently named associate concertmaster for the Seattle Symphony.

Grossman has held principal and assistant principal chairs with symphony orchestras around the country, most recently the Kansas City Symphony. She is an avid chamber musician who enjoys everything from contemporary collaborations to bluegrass to folk-rock.

In addition to directing the Festival for the past decade, Krentz is a devoted teacher and an inventor of devices that enhance the tone of string instruments.

The program will feature the exciting and virtuosic Mendelssohn String Quartet in D Major and the beautiful and haunting Shostakovich String Quartet No. 8 in C Minor, among other works.

Plans are underway for the 25th season of the summer chamber music festival, which features five Centerstage concerts from June 18 through 27. In addition to the main concerts, there will be concerts around the Methow Valley in early June featuring the top student string musicians in the Seattle area.

Then the music continues in July, when cellists with the Seattle Cello Academy, led by Krentz and Haeyoon Shin, bring their energy and passion for music to venues throughout the valley.