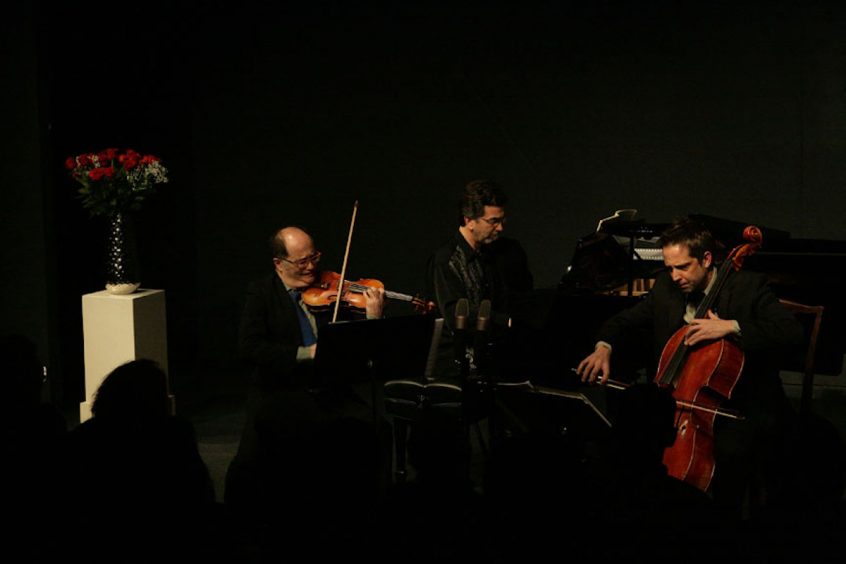 “What’s exciting about piano trios is that you really have three soloists,” said Artistic Director Krentz. The concert included Piano Trio No. 2 by Camille Saint-Saëns. “Saint-Saëns was an amazing organist, a prodigy who excelled in creating mind-blowing music.” Because he was considered conservative for the late 19th century, Saint-Saëns’ talents were not fully appreciated until after his death.

The ensemble played two movements “Winter and Spring” from Astor Piazzolla’s “Four Seasons of Buenos Aires.” “Piazzolla brought the series of classical music to the tango of his native Argentina, expanding the form in exciting new directions,” said Kevin. The two movements let the musicians shine “in a series of wonderful, extended cadenzas with gorgeous solos for each instrument.”

The highlight of the evening was the performance of one of the masterworks of the chamber music repertoire, the Piano Trio in D minor by Felix Mendelssohn. The piece is characterized by graceful melodies and moving and dramatic passages.

Alexei traveled to the Methow Valley from Portugal, where he is currently teaching at the National Superior Orchestra Academy in Lisbon, to join his friend Misha Shmidt in celebrating 40 years of performing together. The concert, hosted by audience favorite Verne Windham, also included a haiku/limerick competition among audience members, complete with gifts and prizes.

After the concert, Golden Ticket holders were treated to an intimate dinner with the musicians at Arrowleaf Bistro. The festivities lasted well past midnight.

On Sunday morning, Executive Director Liz Johnson and her husband Howie hosted a brunch for the musicians and their families before they returned to Seattle and points beyond.