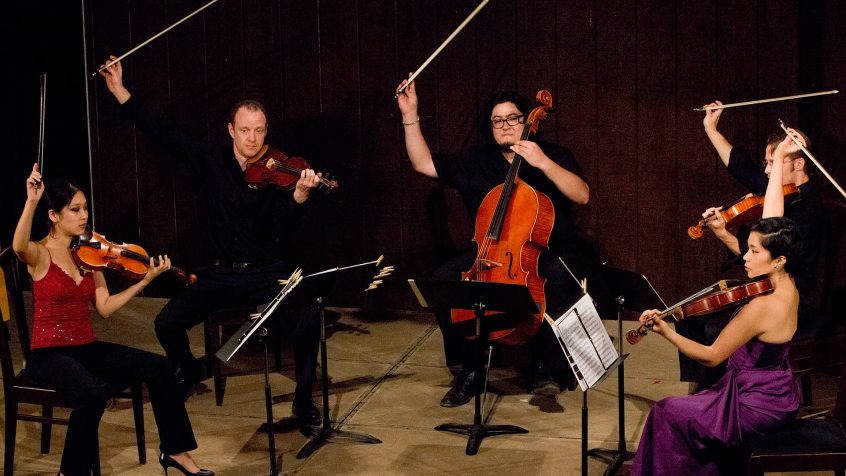 It takes a lot of talent, synergy – and a little magic – for the impeccable performances at the Methow Valley Chamber Music Festival to come together.

It’s a process that unfolds over time. Festival artistic director Kevin Krentz is putting the finishing touches on the essential first steps for this summer’s chamber music festival, lining up a roster of gifted musicians who’ll come together in June to play some of the most exquisite music written for small ensembles.

Although Krentz sometimes hires an established quartet – which can allow the Festival to present an especially difficult piece – he relishes the energy set in motion by combining charismatic, soloistic chamber music players. “What’s wonderful is that the players understand that we don’t have much time, so they come prepared,” he said.

The musicians master on the music on their own, but typically don’t get a chance to combine their parts until they rehearse in the Signal Hill barn, often just the day before the concert.

“It’s a festival when you see people come together to play music. If you hire an ensemble, you’re a presenter,” he said. “It’s also a lot more fun to see music being made in the moment.”

Once Krentz has chosen the performers, he turns his attention to programming. “It’s most important to find what people are good at, and what they’re interested in – the music they already have in their fingers,” he said.

The line-up for this summer includes veteran Methow Chamber Music Festival violinists Grace Park and Mikhail Shmidt and violist Maurycy Banaszek. String bass virtuoso Travis Gore, who played in the Festival several years ago, will be featured in a mystical solo for string bass as well as ensemble work.

New faces include violinist Siwoo Kim, described by the New York Times as “incisive and compelling,” and award-winning pianist Tanya Gabrielian, who’s known for the powerful physicality and poise she brings to the keyboard.

Cellist and composer Paul Wiancko, who has captivated Festival audiences with his innovative musicianship over the years, will be on hand for the entire Festival this summer.

The 2019 Festival will be earlier than usual – from June 20 to 29 – to take advantage of the beauty and clear skies of early summer.

The Festival features four CenterStage concerts in the Signal Hill barn, plus informal concerts around the valley. People are invited to see how the musicians make their magic at free open rehearsals every concert day.

Details of the program and all the musicians will be posted at methowmusicfestival.org. Tickets for 2019 go on sale in April.