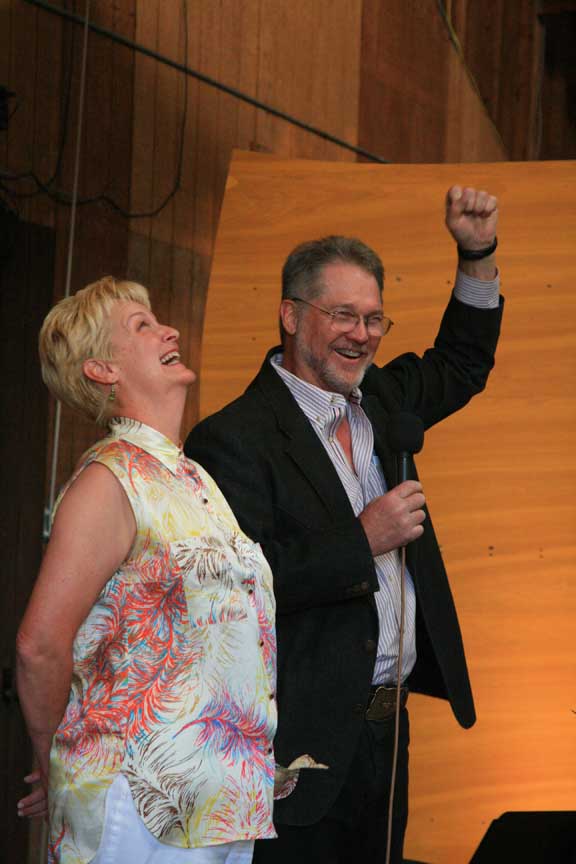 Expertise and Dedication Fuel MVCMF Behind the Scenes

The spacious barn that provides the deeply resonant acoustics, spectacular mountain vistas, and relaxed, convivial vibe of the Methow Valley Chamber Music Festival didn’t come about by accident. It’s the product of the technical expertise, years of hard work, and generosity of Howard and Liz Johnson, who own Signal Hill Ranch, the Festival’s home for the past 10 years.

Howard and Liz had always been supporters of the Festival, loyally attending concerts as the music migrated from meadow to field to tent. But those charming outdoor settings presented challenges, including distracting noise from wind and little shelter from rain.

So, when the Festival needed a new venue for the 2009 season, Howard offered to completely renovate his barn and make it available to the Festival free of charge for a period of five years if the Festival would commit to using it during that period.

“The sound of horses whinnying in the high-ceilinged barn told me that, acoustically, the barn could be transformed into something ideal for chamber music,” Howard said. He was uniquely qualified to make that assessment, given his PhD in acoustics.

Once the board agreed, Howard carried out acoustical tests on different types of rock and gravel to develop the ideal acoustic combination that covers the barn floor today – custom crushed rock (from a local quarry) that’s compacted in layers with mud.

In consultation with Festival Artistic Director Kevin Krentz, the Johnsons and legions of volunteers installed a stage flanked by curved panels, theatrical lighting, and raised seating areas. They converted the pasture outside the barn into a grassy lawn with shade trees, a covered patio, and a fire pit that encourages people to gather and enjoy local food and beverages before the concerts, at intermission, and afterwards, where they can meet the musicians.

“Our dream was to connect people, sound, and visuals, creating a unique social atmosphere,” Howard said.

Meanwhile, Liz helped organize and streamline the logistics and fundraising that keep the Festival running smoothly.

Liz began as director of housing, matching musicians with the Methow residents who house them (many of whom have formed long-term friendships). She also hosted an annual opening-night welcoming dinner, important for cementing ties between the musicians who are often meeting each other for the first time.

Then, after watching the Festival go through three executive directors in just four years, Liz took on that role as well. “I volunteered to do it long enough to figure out why they were burning through so many executive directors,” she said.

Liz discovered that the job took far more time than the board had estimated, including three intense months before and after the Festival during which the director was handling everything from fundraising to grant writing to emptying the trash.

Liz streamlined the job, assigning tasks to volunteers so the executive director could focus on grants, donations, and the future of the Festival. Other people now handle graphics, selling tickets, cleaning the building, setting up chairs, mowing the yard, selling food, and myriad other tasks necessary to the operation of a world-class festival.

Liz also solved the difficult logistical problem of transportation and scheduling of the musicians, who come to the Methow from all over the globe. She’s now served on a strictly volunteer basis as executive director for five years.

At the same time, Kevin was freed up to add more informal concerts around the valley and improve the breadth of lectures before the Centerstage concerts. Lectures now focus on topics as widely varied as the origin of the French horn, the use of hub caps as percussion, and connections between visual and performing arts, Liz said. The approachable atmosphere that now surrounds the Festival is Liz’s proudest accomplishment. “We’ve upended the perception that people might not be qualified to go to a concert because they don’t know enough about classical music,” she said. “At our Festival, anyone can experience the beauty of classical music in a familiar and welcoming environment.”

A lifetime of music

Both Howard and Liz have been involved with music from a young age, and both are musicians in their own right.

Liz’s mother taught piano and was the choir director at their church. Liz saw her first opera at age 9. She played in the handbell choir in high school and directed the handbell choir at the Methow Valley United Methodist Church. She’s also played percussion with the Methow Valley Orchestra. Howard’s mother was also a choir director. Howard spent 13 years singing with church choirs until he was offered the chance to play electric bass guitar for a hip youth choir. That led to playing in rock and jazz bands in college. He took up the stand-up bass when he moved to the Methow, and has played with local jazz ensembles ever since.

Like so many things this year, the Festival fell victim to the coronavirus. “We were sad we had to cancel, but it’s not like we were the only ones,” Liz said. “People were very supportive and appreciative.” She is already planning a special 25th-anniversary season for next year.

In some way, the cancellation is a blessing, since Howard is presently recovering from shoulder surgery and can’t devote his usual time and energy to the festival. “I can’t put on a good show without him, physically and emotionally. We’re each other’s support. We do it together – we enjoy it and love giving back to the community,” Liz said.

“And we greatly appreciate the efforts of the Festival board, staff, and dozens of volunteers who all come together every year to make the Festival so special,” she said.