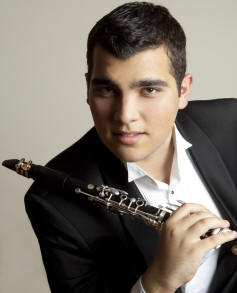 Clarinetist Narek Arutyunian is an artist who "reaches passionate depths with seemingly effortless technical prowess and beguiling sensitivity" (The Washington Post). He has performed the Copland Clarinet Concerto with the Orchestra of St. Luke's at Alice Tully Hall as well as Artie Shaw's Concerto for Clarinet with The Boston Pops. Mr. Arutyunian has also appeared as soloist with the Meridian Symphony, the Albany Symphony, the Long Bay Symphony, and the Longwood Symphony. He has performed recitals at the Washington Center for the Performing Arts, the Lied Center of Kansas, the Buffalo Chamber Music Society, the Weis Center for the Performing Arts, the Westport Arts Center, the Macomb Center for the Performing Arts, the Paramount Theater, Music for Youth, Iowa State University, Pepperdine University, Southern Adventist University, Missouri State University, the Isabella Stewart Gardner Museum, the Morgan Library and Museum, and Carnegie's Weill Recital Hall.

In his 2017-2018 season, Mr. Arutyunian appears in chamber music performances in a return to the Marlboro Music Festival as well as performing three days of educational and community outreach activities prior to his performances of the Mozart Concerto with Oregonís Newport Symphony. He also gives recitals at the Artist Series Concerts of Sarasota, SILL's Music Mondays, and Congregation Rodef Shalom in Pittsburgh. His growing career has also included numerous educational outreach programs in New York City public schools and around the country.

Mr. Arutyunian has performed extensively in Australia, Asia, and in Europe, where he appeared at the Musee du Louvre in Paris and the Palazzo del Principe in Genoa, among others. He has appeared as soloist with the Prague Radio Symphony and in Russia with the Kaliningrad Philharmonic, the Moscow Virtuosi Chamber Orchestra and the Moscow State Symphony Orchestra. Mr. Arutyunian's festival appearances include Juilliard ChamberFest, where he performed Osvaldo Golijov's The Dreams and Prayer, the New York Festival of Song, Krzyzowa Music Festival in Poland, Germany's Usedomer Musikfestival, Musica Viva's Huntington Estate and Sydney festivals in Australia, and the 2013 Young Concert Artists Festivals in Tokyo and Beijing.

Recipient of the 2017 Leon Russianoff Memorial Award and Winner of the 2010 Young Concert Artists International Auditions, he was presented in debut recitals at Merkin Concert Hall and the Kennedy Center to rave reviews. By age 16, he had already won First Prizes in the International Young Musicians Competition in Prague and the Musical Youth of the Planet Competition in Moscow. He recorded the Weber Concertino for clarinet with the State Symphony Orchestra of New Russia.

Born in 1992 in Gyumri, Armenia, Mr. Arutyunian's family moved to Moscow when he was three. He graduated from the Moscow State Tchaikovsky Conservatory where he worked with Evgeny Petrov. He received his Bachelor's degree from the Juilliard School, where he worked with Charles Neidich. He is currently a Master's candidate at the Manhattan School of Music, where he continues his studies with Mr. Neidich. Mr. Arutyunian's clarinet is a personal gift from the conductor and violinist Vladimir Spivakov. He receives general support for his career from the Guzik Foundation in California.