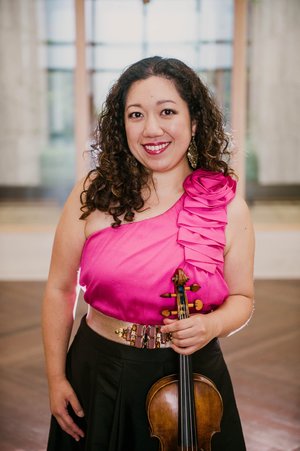 Violinist Miho Saegusa has built a multifaceted career that allows her to cherish the spirit of collaboration. Her passion for chamber music was ignited and nurtured through memorable summers at the Marlboro Music Festival, Ravinia Steans Institute, and Music@Menlo as well as on tours with Musicians from Marlboro. In addition to chamber music, Ms. Saegusa loves the energy and intimacy of chamber orchestras. A longtime dream came true in 2017 when she became a member of the celebrated Orpheus Chamber Orchestra. For five seasons she served as Concertmaster of the Chamber Orchestra of Philadelphia and has been a guest with A Far Cry and the East Coast Chamber Orchestra. Since 2001 Ms. Saegusa is a member of IRIS Orchestra, where she has held the Isaac Stern Concertmaster Chair on numerous occasions.

Born in Kitakyushu, Japan, Ms. Saegusa has played the violin since the age of five. She received her Bachelor of Arts degree from Yale University, and completed graduate work at The Juilliard School, earning her Master of Music and Artist Diploma. She is very grateful to her principal teachers Masao Kawasaki and Dorothy DeLay for their generosity, patience, and for encouraging curiosity. Since 2013 Ms. Saegusa has been a Valade Fellow and Instructor of Violin at the Interlochen Arts Camp, where she works with high school violinists and the Advanced String Quartet Program.