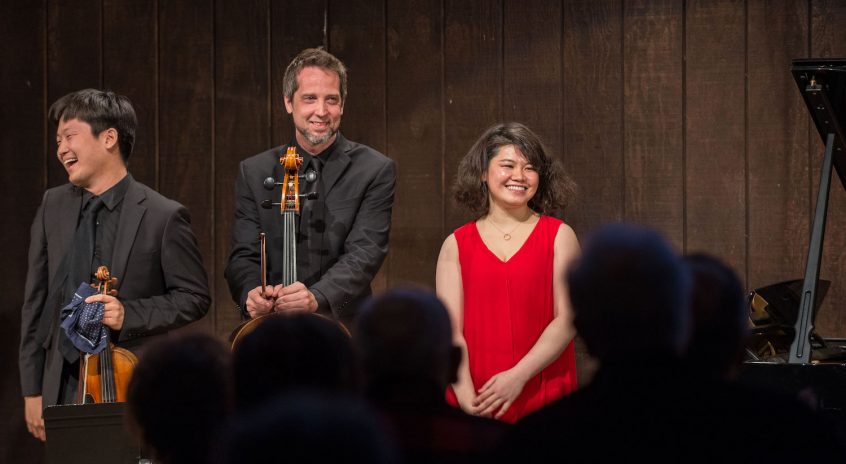 The Methow Valley Chamber Music Festival celebrated early this year, with four sold-out concerts on cool June evenings. The refreshing weather offered ample time for the audience members to take in wildflower-studded hillsides on the Festival grounds before the main event.

The earlier date didn’t alter the fundamental approach of the festival – showcasing music by masters of chamber music repertoire like Mozart and Schubert, along with work by lesser-known composers (a moving piano quintet from the 19th century by Hermann Goetz) and compelling contemporary fare.

The Festival welcomed back musicians including violinist Grace Park, violist Ayane Kozasa, and Travis Gore, whose virtuoso performance on the double bass wowed the audience. Two phenomenal pianists were also on hand – Tanya Gabrielian, whose playing is called “revelatory,” and, in her Festival debut, Zhenni Li, who’s hailed for “torrents of voluptuous sound.” Violinists Siwoo Kim and Nikki Chooi also appeared on the Methow stage for the first time.

Although the main Festival was held earlier this year, there was an encore in July when gifted young musicians from the Seattle Cello Academy descended on the valley. They performed free community concerts in Mazama and Winthrop and received intensive instruction from Festival Artistic Director Kevin Krentz and Haeyoon Shin, the cello academy directors.