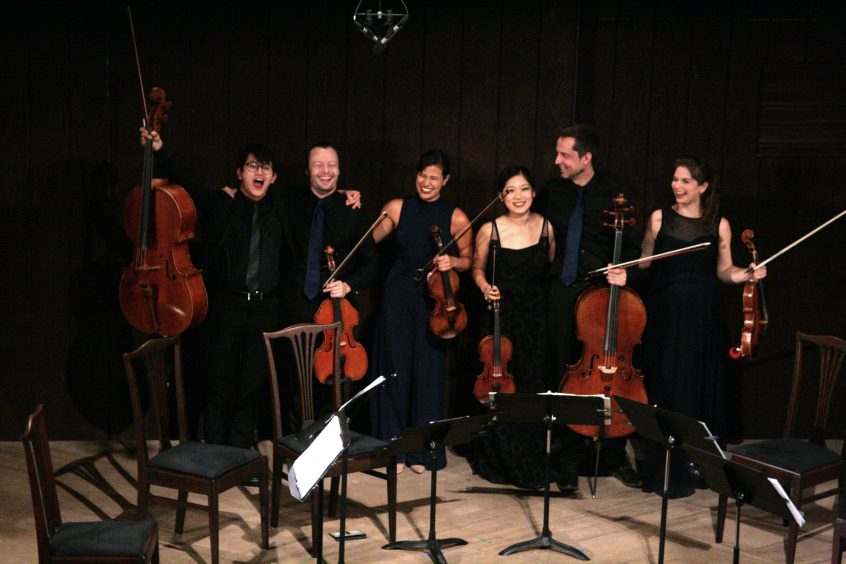 At the 23rd Methow Valley Chamber Music Festival, audiences were introduced to stellar musicians – from an internationally award-winning string quartet to a young pianist and clarinetist – all of whom have seen their careers catapult after they won top prizes in their fields.

Bringing in these artists as their acclaim grows allows the Festival to feature some of the top talents in the country. It also increases awareness of the Festival among musicians, attracting more exhilarating talent for future seasons. “It’s a win-win situation,” says Festival Executive Director Liz Johnson. “New artists often choose to come here based on who’s been here before. And once they get here, they love the audiences and housing hosts and the Valley so much, they keep coming back.”

In addition to string quartets, sextets, and piano trios, the Festival highlighted a mezzo-soprano, three percussionists, and even a group of bulb horns, a simple instrument with an eerily beautiful tone.
In special lectures before each event, concertgoers, who filled the Signal Hill barn to capacity most nights, got insights into music from the baroque through contemporary eras. They also learned about the overlooked contributions of women composers and heard about the exciting careers of pianist Kenny Broberg and clarinetist Naruk Arutyunian since they won international awards last year.

Many locals and visitors got a taste of the magic of chamber music at informal, accessible – and free – concerts around the valley. The Fellowship Quartet—students from Baylor University School of Music in Waco, Texas—performed at venues from the Mazama Store to the Barnyard Cinema, the latter hosting a music-themed movie after the mini-concert. The quartet also continued the Festival’s tradition of working with students from the Pipestone String Camp during the week.

This fall, artistic director Kevin Krentz will return his primary focus to cello performance, teaching, and his numerous inventions – devices that improve the resonance of the cello and specially designed cases that protect string instruments. But he’s already thinking about programming for next season, seeking out both new and familiar repertoire that will excite and galvanize the audience and the festival musicians.

Dates for the 2019 season will be announced in September at www.methowmusicfestival.org.